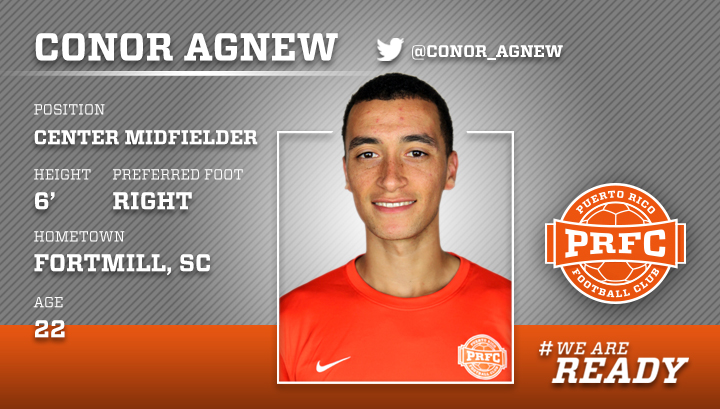 Its game day and after a power nap, some rice, chicken and gravy, and a round of FIFA 16, Conor Agnew is ready to go. The South Carolina native has been playing soccer since he was four years old. One day, while playing with his sisters, he realized he was pretty good at this football thing. There his dream of becoming a pro started. Or maybe he really liked the possibility of working in open fields, since closed spaces are to Conor what snakes are to Indiana Jones. That’s probably what kept him from becoming a lawyer, his second profession of choice, but those court rooms can be very confining.

Conor, A.K.A., Cagnew, was a huge contributor to the University of North Carolina's Charlotte 49ers this past college season, helping them finish second in Conference USA. Now, with PRFC, the rookie defender can finally start his quest to become like his all-time favorite player, Spaniard Andrés Iniesta. He even considers the FC Barcelona midfielder to be one of the biggest influences throughout his career. Every step of the way Cagnew has tried to model his game after Barça’s captain.

As for fun, any J-Cole song will make Conor run to the dance floor. And if you have a karaoke at your party you can be sure he will sing a couple of them. You even might hear him singing one while he's hiking in El Yunque or any other nature trail.

To wrap it up, here is what you need to know about Cagnew: J-Cole, Iniesta, FIFA, and that he feels extremely blessed to start his professional career with PRFC.