I JUST WANT TO WIN 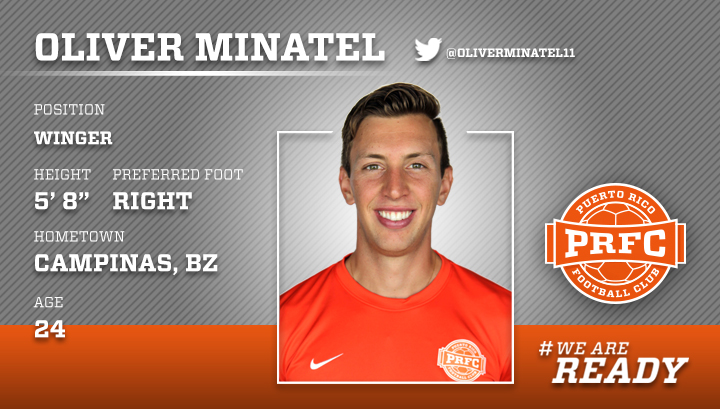 Oliver Minatel came to Puerto Rico FC to win, which is no surprise since he is used to winning. Before joining the club, he won the Fall Season Championship with Ottawa Fury. He’s a product of Paulinia FC in Sao Paolo, Brazil, a young but successful club. In 2009 he was recruited by the PSV Eindhoven Academy in Holland, a club that needs no introduction. He then went on to CD Nacional in Portugal where he dominated with 18 goals in 22 matches for the U19 squad. This granted him a promotion to the Senior Team where he played in the UEFA Europa League.

Oliver has other interests aside football. For example, you could say he is a crime enthusiast.  We don’t mean that he endorses crime, what we mean is that he loves crime dramas. He binged the Pablo Escobar bio-series Narcos on Netflix and he’ll stop everything he's doing if the Oscar nominated City of God comes up on his TV. By the way, he does love crime fighters too, like The Incredible Hulk and the courageous Popeye the Sailor Man.

Back to football, the PRFC winger hails from Campinas, Sao Paolo, hometown of former Sevilla and Porto Striker Luis Fabiano. It is obvious that Brazil has a rich football tradition, so its no wonder that Oliver’s heroes are his fellow countrymen. His all-time favorite player: Ronaldo “The Phenomenon”.  Favorite current player: Neymar. The one person in the world he would have dinner with above anyone else: Formula 1 driver, Ayrton Senna (we know, he’s not a football player, but he’s still Brazilian).

In the end, Oliver Minatel has achived a lot in his short career but he's still like us: he eats his churrasco one bite at a time.