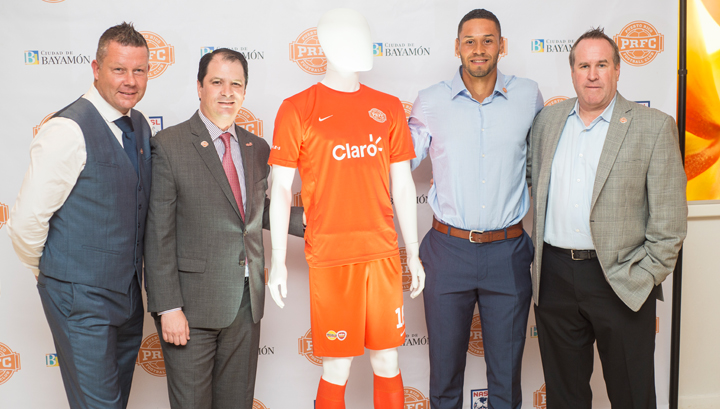 San Juan, Puerto Rico- Puerto Rico FC celebrated the upcoming inaugural season by hosting the event Kick Off 2016 at the Condado Plaza Hotel with the company of season ticket holders, corporate partners and other VIP’s.

In this event the Club officially introduced the players and technical staff that form the first ever PRFC squad, whom later posed for pictures, signed autographs and mingled with season ticket holders, Corporate partners and other guests.

“Tonight was a special night for our fans, partners, and all in attendance, including the entire PRFC organization. We appreciate everyone joining us, and hope the unveiling of our first ever jersey and the surprise big player announcement made all Puerto Rico FC fans happy.” Said Team President Thomas Payne.

Enrique Ortiz de Montellano was very proud to be part of this event and added, “We have been supporting soccer for many years in Puerto Rico especially youth clubs. Partnering with PRFC is a natural step that will allows us to continue this effort. At Claro we are convinced that that sport teach discipline, responsibility, teamwork and respect; qualities that define good men and women. We share Carmelo Anthony’s Vision and hope that this venture inspires future Puerto Rican players. ”