RAISING THE BAR WITH TREVOR SPANGENBERG 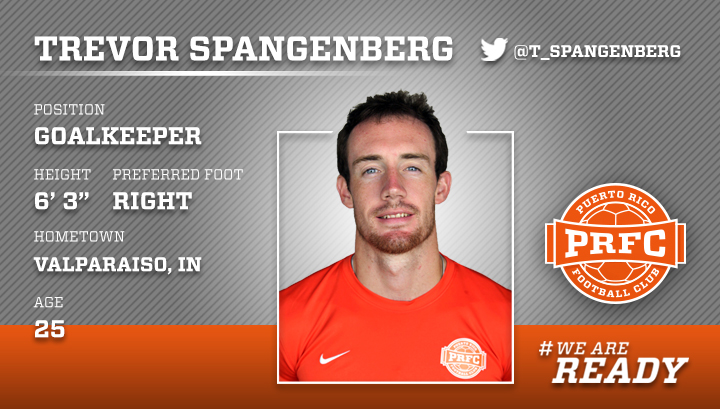 The game of football gives us a lot; it gives us joy, passion and entertainment. Sadly, sometimes it takes from us. In this case it took potential Hollywood superstar Trevor Spangenberg for itself and made him a goalkeeper. Imagine him walking down the red carpet of the latest big budget action movie premier with his entourage. He could have replaced Chris Evans as Captain America, his favorite superhero, but instead he decided to become one of PRFC’s goalkeepers.

T-Rev, as he is also known, has an eclectic taste in music that goes all the way from EDM star Tiesto to Puerto Rican reggeaton legend Daddy Yankee. You can also sprinkle a little modern rock in there, such as the Killers, with a little country music on the side. Country music is special to him since it reminds him of his hometown Valparaiso, Indiana, where he started playing soccer at 5 years old because they handed out orange slices at halftime.

Spangenberg was a standout during his four-year career in Missouri State University, where he also moonlighted for PDL’s Laredo Heat and Springfield Demize. In 2013 he was named MSU’s Most Valuable Player and allowed the least goals in the NCAA. He began his professional career in 2014 in the MLS with Chivas USA and signed with the New England Revolution the following season.

This season Spangenberg hopes to raise the bar of soccer in the island of Puerto Rico and looks forward to defending the club’s goal in front of a very passionate fan base.