JORGE RIVERA WANTS TO LEAVE EVERYTHING ON THE FIELD 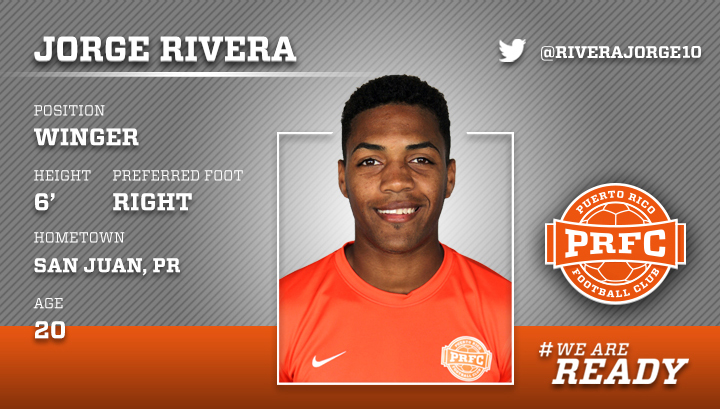 At just 20 years old, Jorge Rivera is one of the most promising prospects of Puerto Rican football. Alongside Héctor Ramos and Joseph Marrero, this year he has led the Puerto Rico National Team to three victories in four official matches that advanced them for the first time to the third round of the Caribbean Cup. Signing with PRFC was a dream come true for the young winger and now he knows he’s setting the bar for other kids that have his same aspirations.

Jorge was a member of Don Bosco FC, one of Puerto Rico’s oldest youth clubs. Its mission is to help the at risk families of the Cantera Peninsula in San Juan. This is where he was born and raised, and in that part of San Juan football was part of your daily routine. He began playing with his family since he was three years old and never stopped. He loved the beautiful game so much that he would always volunteer as a ball boy during Don Bosco’s Senior Team games just to be close to the action. Throughout this time his mother was there every step of the way to keep him focused on the path that led him to becoming a professional athlete, the thing he loves the most in the world.

Now with PRFC, Jorge wants to leave everything on the field and defend the shield he wears on his jersey. In the locker room his mission is to make all of his teammates laugh and keep a loose attitude before the game. But once the game starts the only important thing is to win no matter what it takes.