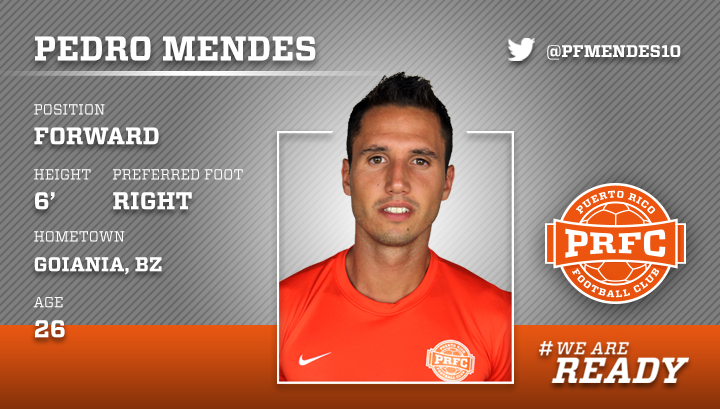 Pedro Mendes knows how to make a splash. The flashy forward has won NASL’s Goal of the Year and Play of the Week, plus has been named Player of the Week and has been a Team of the Week member. It’s safe to say he will never shy from the spotlight and loves being in the center of all the action.

Football is in his blood since he was born in Goiania, Brazil, where football is king, life, passion and everything else. This means that he’s been playing football since he could walk and grew up idolizing his fellow countrymen Pele, Ronaldo, Ronaldinho and, his current favorite player, Neymar. These men are what inspired him to dream big and become a professional football player, a dream that his parents supported every step of the way.

Now entering his 6th season, Pedro can think candidly about a life without football. For him there was no other option than being a professional athlete, but he does believe he would have made a great model if this didn’t pan out. Once again, football has stolen a potential Hollywood superstar from us.

Pedro came to Puerto Rico FC to provide the magic that won him all the previously mentioned awards and recognition. He loves the Island because it reminds him of his home and, in his own words, it’s simply paradise.