CHRISTOPHER NURSE HAS NO DOUBTS WHERE HE WANTS TO PLAY 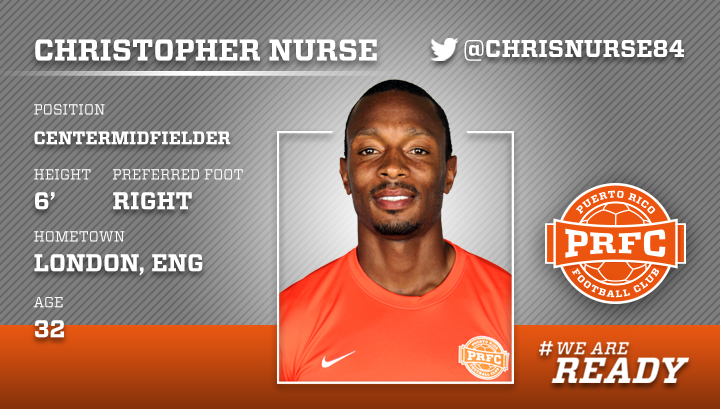 When professional football returned to Puerto Rico, Christopher Nurse had no doubt in his mind where he wanted to play next. After the Puerto Ricans, he’s probably the player that knows the Island the most, having played here with Guyana’s National Team, visiting NASL and USSF teams, and as one of the staples of the Islanders. He loves its people and he wants to succeed for them because he knows this Club represents more than a fan base, it represents heritage and culture.

Nurse was born in London, England, where every kid played football. He was always following his brother around and, as younger brothers tend to do, he wanted to be better than him at football. He grew up admiring the Brazilian National Team, and even though it was before his time, he was always in awe when he saw highlights of the great Pelé. Growing up, his mother was always present giving him the support he needed. Her belief in him is what inspired Nurse to become a professional football player. This became a reality when he signed a semi-pro contract in England that allowed him to complete his degree in Sports Therapy. Later on he moved to the United States to dedicate himself full time to the sport he loves.

Nurse is one of the veterans of PRFC and you will see his calm demeanor on and off the field. He leads with his unquestionable work ethic, but dancing reggaeton or pranking one of his teammates is never below him. He is still one of the guys, just with a little more experience, a broader perspective of life and the stamina of a teenager.