TOUGH LOSS FOR PUERTO RICO FC AGAINST THE ROWDIES 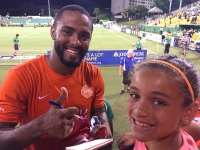 St. Petersburg, Florida - Puerto Rico FC had one last shot to get three points before returning home and it was against the Tampa Bay Rowdies, who were coming off a road loss against the Railhawks.

The Rowdies came out wanting to prove that they are much better than the team that went to Carolina and they showed it in the 10th minute, when the legendary Joe Cole received a throw in and controlled it with his chest. While the ball was in the air, Cole jumped and bicycle kicked it in for the first goal.

In the 19th minute, Adrian Whitbread was forced to go to his bench early in the game for the third time in four games. This time it was Christopher Nurse, who had to be subbed out for Brian Bement. Nurse had suffered an ankle injury that he played through against Rayo, but aggravated against Tampa Bay.

Fifteen minutes later, the Rowdies struck again when Eric Ayala kicked the ball beautifully towards the upper right edge of the arch where Meves had no chance of stopping it.

Even though Puerto Rico FC had a couple of shots to cut the lead, first half ended with them down 2-0.

In the 60th minute, Jorge Rivera made his professional debut when he came in for Evans Frimpong. The 20 year old looked in his first 30 minutes of action.

Despite a constant exchange of opportunities, it seemed the second half would end with the same score it started with until Tommy Heinemann shot from mid distance and scored the Rowdies third goal of the game at the 90th minute.

With this result Puerto Rico FC is coming back home with only one point. Now the squad prepares for a rematch against Rayo OKC on Saturday, July 23rd at Juan Ramón Loubriel Stadium. Tickets are on sale at puertoricofc.com/tickets.