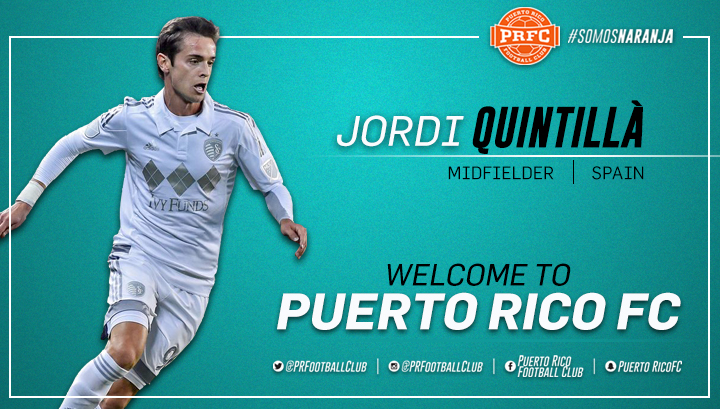 “We looked at a lot of footage of Jordi and we really liked what we saw. He gives us a very good attacking option especially with his left foot and we believe he covers some of our weaknesses from last year.” Said Head Coach Adrian Whitbread.

Jordi joined Barcelona’s prestigious academy La Masia at age 16 and in 2012 was promoted to Barça’s B team in the Spanish second division. He was later loaned to CF Badalona and CE L’Hospitalet before moving to France where he joined AC Ajaccio. He then caught the eye of MLS scouts and was signed by Sporting Kansas City of the MLS, playing in 16 games.

The Spaniard will bring an impeccable first touch, vision and a range of passing abilities which will complement the attacking options PRFC already has.

PRFC’s 2017 season kicks-off March 25th at Juan Ramón Loubriel Stadium against the New York Cosmos. Get your season tickets now and be a part of the Puerto Rico FC family. Season tickets start at $128, which gives fans access to exclusive events with players, discounts at the team store and much more. Taxes and fees apply. Call 787-722-PRFC to learn more about these amazing benefits or visit puertoricofc.com/tickets.