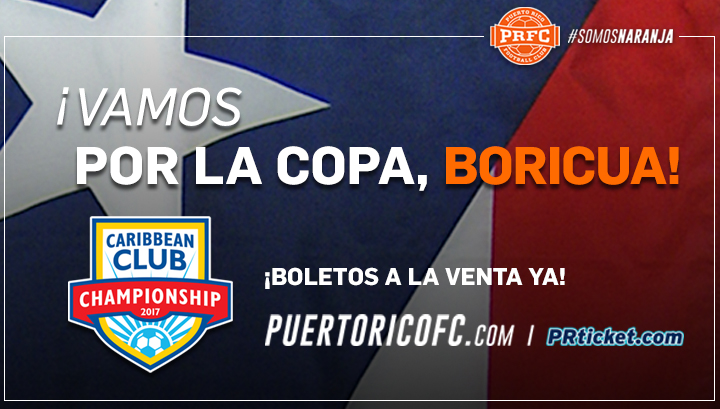 San Juan, Puerto Rico- The time for Puerto Rico FC to defend the Island in the Caribbean Club Championship (CCC) is just around the corner and you can get your tickets now for just $10 per day, which includes two exciting games.

PRFC will begin its quest to conquer the Caribbean on March 14 when the first round of the CCC kicks off at Juan Ramón Loubriel Stadium. All three days will see double header action between SV Transvaal, Portmore United FC, Scholars International, with PRFC being the primetime attraction.

On Tuesday, the 14th PRFC will face SV Transvaal from Surinam and then on Thursday, March 16th host Portmore United FC from Jamaica; both games at 8:00pm. Saturday’s match will be the most important of all since the winner of the group will be decided when PRFC faces Scholars International from the Cayman Islands at 8:00pm and Portmore will play Transvaal at 5:30pm.

The winner of the group advances to the CCC final where a guaranteed spot for the Scotiabank CONCACAF Champions League will be up for grabs.

Season ticket holders that have paid in full will get in for free on Thursday while tickets for the Tuesday and Saturday match will only be $7. Season ticket holder should call their account executive for more information about this offer and how to get their tickets.

Come and support Puerto Rico FC as they represent the Island in the most prestigious tournament of the Caribbean for just $10 per day. You can also get the NASL Home Opener Pass for $35 which includes all three matches in the CCC and PRFC’s home opener against the New York Cosmos on March 25th. More offers are available at puertoricofc.com/tickets or call 787-722-PRFC.