“WE HAVE TO BE TOGETHER, NOBODY IS MORE IMPORTANT THAN THE OTHER.” 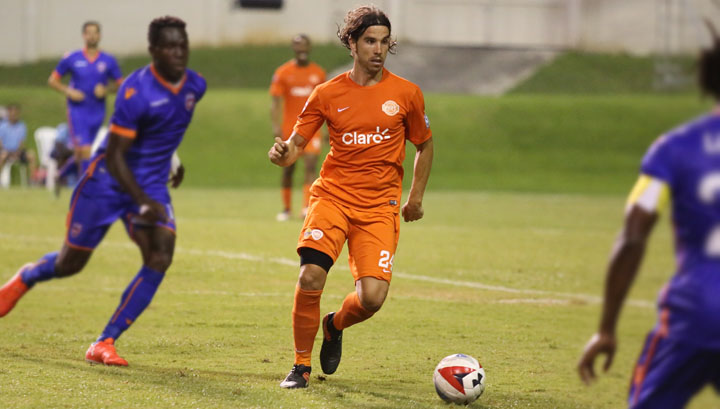 Born and raised in Spain, Yuma rose through the ranks in Rayo Vallecano until he got promoted to the first team. With 10 years of experience in Spain, Javier Monsálvez then moved abroad in 2016 to the U.S to play in the NASL with Rayo OKC. After 18 caps with Oklahoma, he moved to the Island to play for Puerto Rico FC.

In the last away game versus NY Cosmos, played in Brooklyn, Puerto Rico FC was ahead by two goals until a red card was given to Yuma in the 35th minute, after the Spanish midfielder went to intercept the ball. The seemingly controversial call changed the whole pace of the game and the Cosmos took advantage of PRFC's 10 player team, later scoring four goals to win the match.

Yuma, who was suspended for one game, missed the match against North Carolina FC (1-2) where the player would’ve given much needed stability in the midfield. Puerto Rico FC created several opportunities to win the game, but fell after a 90th minute goal by Billy Schuler.

“We have to be together, nobody is more important than the other. Given my experience, I would provide the calmness the team needs, in the defense as well as in the offense. Every player is different, but we’ll give it our best shot,” said Yuma.

Monsálvez is available for the next match against Miami FC at Riccardo Silva Stadium, where he’ll be an option for the club’s chance to spark a win against Alessandro Nesta’s men.

“I’ll be at the disposal of the coach (Marco Velez), I’ve trained well and he’ll let me know if I’ll play or not. I’m available for the team, to give it my all”.

A rematch for the visitors as Puerto Rico FC looks to get the first victory of the season. Last time the team was in Miami, the score was 1-0 in favor of the visitors.