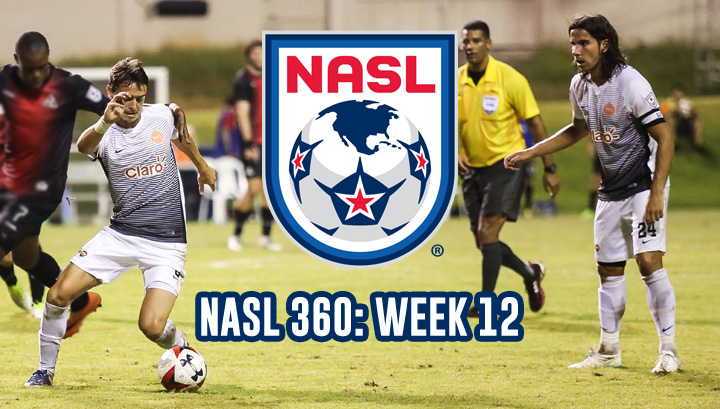 It wasn’t easy, but Miami FC maintained its five point lead in the NASL Spring Season title race with the narrowest of wins over FC Edmonton on Saturday night.

Two clubs chasing the league leaders, Jacksonville and San Francisco, kept pace in the title race with emphatic wins away from home. Armada FC claimed three points in Indy for the first time in club history, while San Francisco remained undefeated on the road in its inaugural season with a win in Puerto Rico.

In Week 12’s lone afternoon game, the New York Cosmos came from behind to earn a point against visiting North Carolina FC in Brooklyn.

A full recap of each Week 12 contest can be found below:

With other teams nipping at its heels following earlier Week 12 results, Miami FC fought off a lively FC Edmonton side to grab a 1-0 victory at a packed Clarke Stadium on Saturday night.

The league leaders found things difficult for themselves in Edmonton, as Colin Miller’s side looked like the Eddies of old with rock-solid defense and free-flowing counterattacks.

Following a quiet first half, the Eddies thought they had gone ahead in the 72nd minute. Forward Tomi Ameobi headed home what appeared to be the opener, but a foul called on the play made the Englishman’s effort all for naught.

Instead, Miami FC found the game’s only goal, and it was the red-hot Enzo Rennella who finished it off. In the 80th minute, forward Stefano Pinho was played in on goal and the Brazilian squared the ball for Rennella, who poked it home under pressure from the Eddies defense.

The visitors set the tone early when forward Derek Gebhard drew a penalty in the 3rd minute. Midfielder Jack Blake stepped up to the spot a minute later and put Armada FC into the lead. Indy was resilient and answered shortly thereafter with a goal of their own in the 10th minute. Forward Eamon Zayed got on the end of a corner kick from defender Nemanja Vukovic to level the score at 1-1.

Jacksonville went back in front in the 41st minute thanks to a well-placed finish from forward J.C. Banks. The Milwaukee native had the ball fall at his feet following a run from Gebhard, and he quickly dispatched a shot into the corner past Indy goalkeeper Jon Busch. Things got worse for the Boys in Blue just before halftime when defender Lovel Palmer picked up a red card following an exchange with Blake.

The second half belonged to Armada FC, and Banks didn’t waste any time adding a third for the visitors. The dynamic forward found himself in the right place at the right time in the 50th minute, finishing off a rebound at the doorstep. Gebhard put the icing on the cake 10 minutes later, tapping home midfielder Jemal Johnson’s low cross to make the score 4-1. Jacksonville did lose goalkeeper Caleb Patterson-Sewell to a red card midway through the second half after the veteran shot-stopper handled the ball outside of the penalty area.

Midway through the first half, Canadian international Kyle Bekker cut inside on his left foot and snuck a shot inside the near post past Puerto Rico goalkeeper Austin Pack. The hosts pulled one back through Honduran midfielder Jairo Puerto in the 65th minute, giving owner Carmelo Anthony, who in attendance on Saturday, something to cheer about.

Just four minutes later, though, Bekker made it 3-1 with a spectacular effort from 30 yards out. The Deltas would go on to finish the job, improving their road record to 3W-3D-0L.

The New York Cosmos and North Carolina FC each came away with a point on Saturday afternoon following a back-and-forth affair at MCU Park in Brooklyn.

Playing before 4,285 fans, the Cosmos got on the board early through forward Irvin Herrera. The Salvadoran international made a run to the near post and snuck a low shot past visiting goalkeeper Brian Sylvestre to open the scoring.

North Carolina was back level just four minutes later – and in sensational fashion. Forward Billy Schuler got on the end of a punch by Cosmos goalkeeper Jimmy Maurer and unleashed an electrifying full volley from distance to make the score 1-1. Just before halftime, North Carolina was in front thanks to a vintage Lance Laing free kick from 25 yards out.

The Cosmos created plenty of chances, though, and their hard work finally paid off in the 84th minute. Ghanaian midfielder Kalif Alhassan received the ball in the penalty area, cut inside on his right foot, and curled a lovely chip over the outstretched arms of Sylvestre to salvage a point for the hosts.