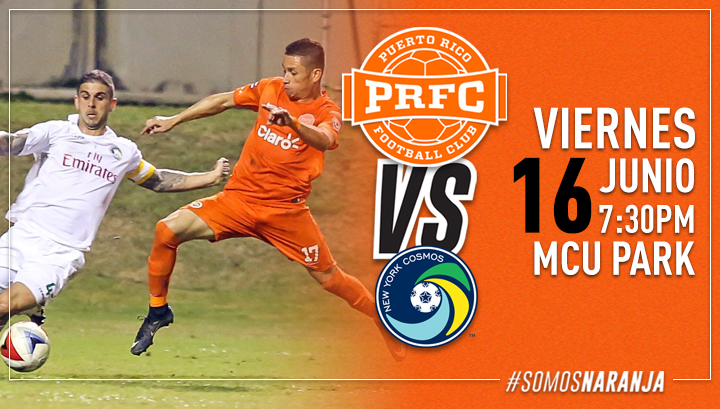 San Juan, Puerto Rico- Puerto Rico FC will travel to Brooklyn for a rematch against the New York Cosmos on Friday, June 16th at MCU Park.

Puerto Rico FC left New York last time with a bitter taste in their mouth. After having a two goal lead, a controversial red card sent Yuma to the locker room in the first half. With a one man advantage the Cosmos were able to take the lead. In spite of that, PRFC almost rescued a point in the final minutes, and believes this is an opportunity to make things right.

“We are 100% sure that the past game was ours to win. We are going to New York with that confidence in us. The team knows what to do, we just have to execute the game plan and we will come back with the three points,” said Yuma who has worn the captain’s armband the past three games.

Giuseppe Gentile and Emery Welshman shined bright in this game scoring each a goal, while Welshman added an assist.

The Cosmos are coming off a thrilling 2-2 draw against North Carolina FC in Brooklyn, taking their unbeaten streak to eight games. Irvin Herrera and Kalif Alhassan were the heroes in the absence of Juan Guerra who missed the game due to a red card received in the previous match. Guerra and Herrera are now tied with Ayoze and Javi Márquez for the team lead in goals scored. Despite the result, the Cosmos continued their unusual home form, only winning one of their six home games.

Don’t miss all of the action of #NYCvPRFC on WAPA 2 with kickoff set for 7:45pm this Friday. Join us at The Place in Condado for our Watch Party with great food, happy hours, giveaways and PRFC's Tyler Rudy and Trevor Spangenberg.