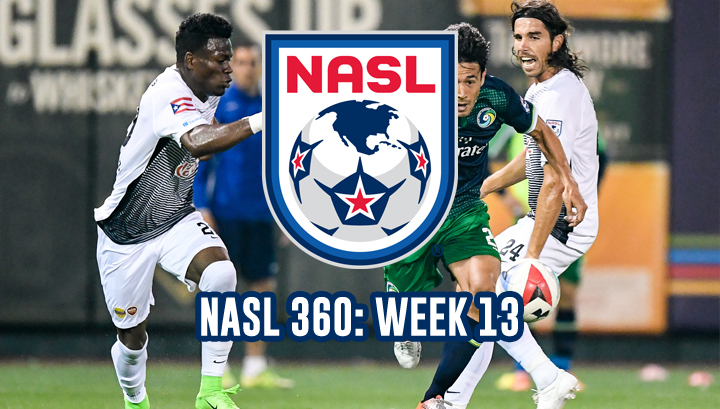 After winning the NASL Spring Season Championship last year, Indy Eleven’s title defense has proved to be difficult in 2017. In Week 13 against North Carolina FC, though, the Boys in Blue were able to field a full-strength lineup for the first time in weeks, and the club finally got its elusive first win.

League-leading Miami FC smashed visiting Jacksonville Armada FC to open up a seven-point advantage in the Spring Season Standings with four weeks to play. The closest teams to Miami in the table also won in Week 13, as the New York Cosmos topped Puerto Rico FC in a wild, six-goal affair and the San Francisco Deltas edged FC Edmonton at home.

A full recap of each Week 13 clash can be found below:

First-place Miami FC put even more distance between itself and the rest of the field on Saturday night, crushing Jacksonville Armada FC, 4-0, at Riccardo Silva Stadium in Miami.

Pinho opened the scoring in the 15th minute, putting himself in the right place at the right time after some excellent work in the left side of the penalty area by Ghanaian international Kwadwo Poku. In the 27th minute, Rennella bagged his first goal, finishing off a beautiful move that involved passes from midfielders Richie Ryan and Dylan Mares.

After Miami held its 2-0 lead for quite some time, Rennella was at it again in the 79th minute. The La Liga and Serie A veteran latched onto a long pass from Martinez before rounding visiting goalkeeper Kyle Nasta and scoring into an open net. Martinez put the icing on the cake with a blast six minutes later following a pass from Rennella.

The New York Cosmos scored three second-half goals to come from behind and beat visiting Puerto Rico FC, 4-2, on Friday night at MCU Park in Brooklyn.

Ayoze started things off with a beautiful free kick into the corner of the net in the 13th minute, but New York’s lead was short-lived. Puerto, a Honduran international, scored for a third straight week to level the score at 1-1 in the 17th minute. Just seven minutes later, the visitors went ahead. Conor Doyle finished off a beautiful move from point-blank range, and it was the in-form Puerto who provided the assist.

Puerto Rico maintained its lead until the 69th minute when Ledesma scored a stunning goal just seven minutes after coming on as a substitute. Following the Argentine’s long-distance equalizer, Restrepo nabbed the lead for New York in the 74th minute. The NASL veteran slid ahead of a Puerto Rico defender to tap Irvin Herrera’s pass home.

The visitors were reduced to 10 men when Costa Rican defender Rudy Dawson was sent off, and New York piled on the pressure as a result. The Cosmos ended up having one more goal in them, as Vranjican, making his NASL debut, found a late insurance goal.

It took until mid-June, but Indy Eleven has a victory under its belt in 2017. The Boys in Blue earned a deserved 2-0 win over North Carolina FC on Saturday night at Carroll Stadium in Indianapolis.

Indy appeared to grab the lead in the 13th minute when defender Marco Franco found last year’s leading scorer, Eamon Zayed, in front of the net, but the Irishman was adjudged to be offside on the play. After the break, the Boys in Blue finally found the net through Braun. In the 60th minute, defender Nemanja Vukovic saw his cross bounce around the penalty area before Braun got the last touch on it for his fifth goal of the season.

The hosts sealed the victory in the 84th minute thanks to a goal from Speas. Rookie contributor David Goldsmith played a perfect ball across the face of goal and Speas was there to smash it off the post and into the net.

The San Francisco Deltas moved into second place in the Spring Season Standings with a hard-fought 1-0 win over visiting FC Edmonton on Saturday night at Kezar Stadium in San Francisco.

Forward Devon Sandoval’s 40th-minute penalty kick stood up as the Deltas defense post its sixth clean sheet of the season.

FC Edmonton probably should have taken the lead inside seven minutes when midfielder Sainey Nyassi was gifted a breakaway opportunity by the hosts. The Gambian international’s shot was saved by Deltas goalkeeper Romuald Peiser, however. Later in the first half, the Eddies struck the post on an odd play that saw midfielder Mauro Eustaquio’s cross nearly find its way into the back of the net.

Sandoval’s spot kick put the Deltas ahead just before halftime, and the goal was really the only action to speak of until things picked back up in the 64th minute. Attacking midfielder Pablo Dyego thought he had scored from distance, but Eddies goalkeeper Nathan Ingham was up to the task.

After Ingham made another save to hold the Deltas lead at one goal, Canadian international Adam Straith came inches away from equalizing. The veteran’s volley from a corner kick went just wide at the far post. Straith’s chance would end up being the visitors’ last on the night, and ultimately the Deltas were able to come away with all three points.